In 1800, Italian physicist Alessandro Volta published results of an experiment he named the Voltaic pile. This stack of zinc and copper is now known as the first electrical battery. Since then, batteries have become increasingly smaller, more powerful, and more efficient. In 1991, the lithium-ion battery was introduced, having the highest energy density and slowest loss of charge in the rechargeable battery market. Today, energy storage and usage rely more heavily on natural energy harvested from their environment. These systems, including solar power, wind energy, or salinity gradients, are becoming more popular due to their renewable nature. However, the power that is generated from using these natural sources fluctuates randomly with time. In the case of solar cells, power attained in one unit could range from 1 μW to 100 mW, a scale 100,000 times different. Hence, charging and discharging these systems are much more variable than in conventional systems.

Bhat et a.l (2017) attempt to fundamentally change the way harvested energy is stored and used in batteries with different efficiencies. Whenever naturally harvested power is lower than the power required for system operation, a system cannot run from that source alone. First, energy must be stored in a battery, then simultaneously drawn from the battery and the natural source, enabling the system to run from the combined power. END_OF_DOCUMENT_TOKEN_TO_BE_REPLACED

An interesting article on the Clean Technica website posted by Jake Richardson on March 15th, discusses the Jagpod, the World’s first energy-efficient tiny home that uses recycled shipping containers and solar panels to provide affordable and sustainable housing. [https://www.indiegogo.com/projects/the-jagpod-solar-powered-shipping-container-home–2#/] The Jagpod was created by founder of Jaguar Containers, William Coit, who after spending three months in West Ghana realized that many villages do not have sustainable housing. As of now, the Jagpod comes in two standard types, a 20 ft. and a 40 ft. unit. The 20 ft. unit has 144 square feet of living space and starts at a price around $30,000 whereas the 40 ft. unit has 300 square feet and starts at about $60,000. Because of smaller size, the 20-foot pods are much easier to transport but the larger unit satisfies the needs of people who would prefer more space over ease of transportation. William Coit was not the first person to create a home out of a shipping container, but what he is a front runner for is providing energy for these homes through solar power. Each type of container includes 2 to 4 235 Watt solar panels with a 27-volt battery tank to diminish the unpredictability of off the grid energy. END_OF_DOCUMENT_TOKEN_TO_BE_REPLACED 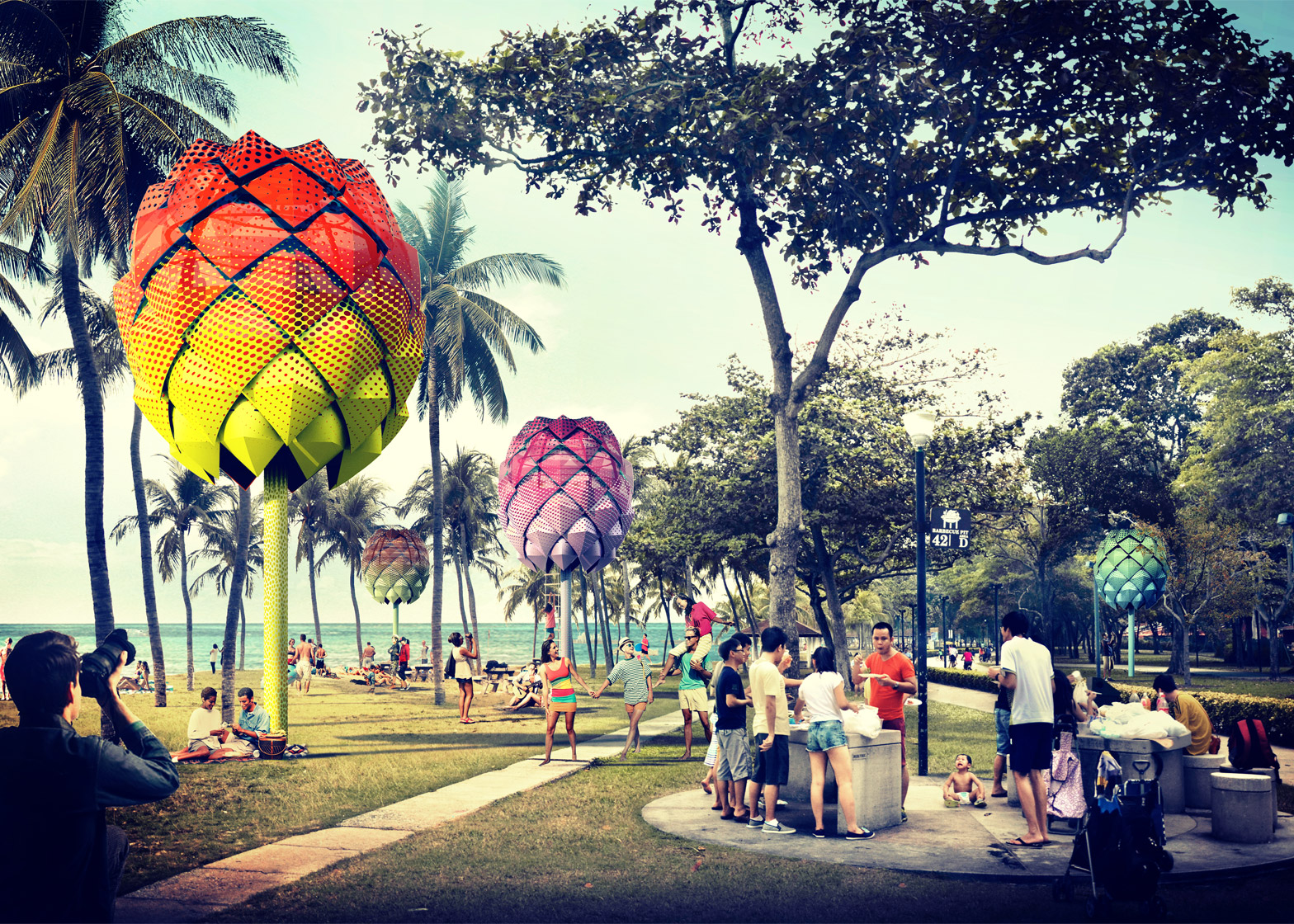 Spark is an environmentally friendly international design studio. Each of its four offices in Beijing, Shanghai, and Singapore work to create distinctive solutions that reflect initiatives of attaining more sustainable environments across the globe. In Singapore, Spark wants to use recycled plastic from the ocean to build a series of elevated Beach Huts across the coast. The aim is to raise awareness to the negative effects of ocean plastic, which has contributed to the annual death of millions of seabirds and thousands of sea manuals. END_OF_DOCUMENT_TOKEN_TO_BE_REPLACED

An MIT research team has recently developed what is believed to be the thinnest, most lightweight, and flexible photovoltaic cell, with the ability to be installed onto any surface and the potential to charge any portable electronic device. The solar cell is so light that it is able to rest on a soap bubble without the bubble being popped. The real key to this innovation Is a one-process approach in manufacturing the ultra-thin solar cell and the unique substrate that supports it. END_OF_DOCUMENT_TOKEN_TO_BE_REPLACED

Computer World posted an article detailing the completion and opening of the largest solar power plant in the world in Morocco. The solar power plant will supply 1.1 million people with clean energy and will reduce carbon emissions by 760,000 tons annually. The name of the plant is the Noor Concentrated Solar Power (CSP) plant and it is located in the Souss-Massa-Draa area in Morocco, close to 6 miles outside of Ouarzazate. The Noor CSP plant cost over $9 billion to build and began operation on Thursday, February 4th. END_OF_DOCUMENT_TOKEN_TO_BE_REPLACED

A new initiative from the US Department of Energy aims to “develop regional energy experts to provide technical energy assistance and informational resources,” according to a DOE press release. Perhaps unsurprisingly, this move has already drawn criticism from conservative pundits, who are calling the move a waste of money on the government’s part.

Just a day after the Andrew Follett at the Daily Caller has already released a piece [http://dailycaller.com/2016/02/16/energy-dept-spends-7-million-on-north-alaska-solar-power-except-its-dark-247/] decrying the program as a waste of government money. The headline, which declares that the energy department has spent “$7 Million On North Alaska Solar Power, Except It’s Dark 24/7,” is both misleading and factually incorrect. While that may be true at some points in the winter for locales above the Arctic Circle, the grant isn’t limited to these locations, and a report from the Department of Energy’s Office of Indian Energy notes that in the southern parts of the state, power production from solar panels doesn’t actually have to stop during the winter END_OF_DOCUMENT_TOKEN_TO_BE_REPLACED

India’s government has a bold goal for deploying renewable energy: 175 gigawatts of electricity-generating capacity by 2022, including 100 gigawatts of solar power. The country has a history of promoting renewable energy and a rapidly growing portfolio of solar and wind projects, but meeting the solar target alone will require a growth rate equivalent to doubling India’s installed solar capacity every 18 months. It will also require a clear understanding of the three factors that drive energy demand in India (access, security, and efficiency); new federal and state policies and incentives; innovative financing for capital investments estimated at $100 billion or more; and additional funding for manufacturing, training, and job creation. Project developers will have to grapple with the cost and availability of land, grid connections, and backup power. To meet the electricity needs of the poor and encourage rural entrepreneurship, India’s energy policies should aim for a mix of grid— connected and decentralized renewable energy sources. END_OF_DOCUMENT_TOKEN_TO_BE_REPLACED

The US-based solar energy company Sunrun, which claims to have “the second largest fleet of residential solar energy systems” in the country [http://fortune.com/2015/06/26/sunrun-ipo-solar-silicon-valley/], has announced that it has secured funding that points to a bright future for the company. While the market for solar energy is still nascent, Sunrun has done rather well for itself – especially given tighter state regulations and the financial difficulties of the renewable energy industry. But in spite of new regulations in the famously sunny state of Nevada that forced the company to withdraw operations from the state, the company is feeling good about its prospects and future – in no small part due to the company’s recent announcement that they have closed $250 million of senior secured credit facilities for its future growth [http://www.forbes.com/sites/peterdetwiler/2016/02/03/sunruns-250-million-in-financing-a-positive-sign-for-distributed-solar/#11aad2306cbc]. END_OF_DOCUMENT_TOKEN_TO_BE_REPLACED

A long and protracted battle between environmentalists and the owners of a coal plant in southern Indiana may finally be coming to a close. The settlement, which was reached among Duke Energy Indiana, the Indiana Office of Utility Consumer Counselor, and various environmental groups in the state, will offer ratepayers refunds totaling $87.5 million for charges incurred during the startup and testing phases of the power plant of the coal plant located in Edwardsport, Indiana, as well as include $1 million for low-income assistance and community solar power grants. END_OF_DOCUMENT_TOKEN_TO_BE_REPLACED

A recent Greentech Media article outlines the worldwide trend of mobile energy plants being moved into the ocean. Author Julia Pyper surveys energy initiatives regarding mobile power plants across the globe, including China, Russia, Japan, U.S., and Norway. Much of construction will be completed soon, by late 2010s or early 2020s. Pyper also examines the pros and cons of each policy, noting how benefits differ depending on the type of energy plant. Also, these plants are expected to be less harmful to the environment than onshore plants, take up less livable space, and are cheaper to maintain. However, it will be hard to find staff and equipment for these floating devices, and radioactive substances could potentially contaminate the surrounding areas. END_OF_DOCUMENT_TOKEN_TO_BE_REPLACED