Methane (CH4) is a much stronger—30 times as strong—greenhouse gas than CO2 in the short term, but has a much shorter atmospheric lifetime, being oxidized to CO2 by another atmospheric chemical entity, the hydroxyl radical (OH-). But either the production of CH4 has been increasing, or that of OH- decreasing, because since 2007 atmospheric levels of CH4 have increased by 3% after years of being flat. Why?

Is it the large amounts of CH4 now known to have been released by fracking? This has seemed a likely candidate, but Paul Voosen (2016) writing about a session in the American Geophysical Union annual meeting in San Francisco in December, indicates that the data are not compelling. END_OF_DOCUMENT_TOKEN_TO_BE_REPLACED

The seismicity induced by oil and gas operations in Oklahoma generally appears to be caused by reinjection of wastewater coming out with oil and gas rather than the increase hydraulic pressure from fracking directly. Not so in western Canada where much less wastewater is produced and injected, but there is nevertheless considerable induced seismicity tightly clustered in space and time near hydraulic fracking sites, according to Xuewei Bao and David W. Eaton (2016) writing in Science.

The figure from the paper (above) shows locations of seismicity in northwestern Alberta, anda from 1985-2016. The locations of the largest earthquakes are shown by date. END_OF_DOCUMENT_TOKEN_TO_BE_REPLACED

The Keystone Pipeline System is a three phase oil pipeline running through Canada and the United States. Phase I, the Keystone Pipeline, delivers oil from Hardisty, Alberta (in Canada) to Steele City, Nebraska, and eventually Roxana and Patoka, Illinois. Phase II, the Keystone-Cushing extension, runs from Steele City to Cushing, Oklahoma. The Gulf Coast Extension, Phase III, delivers oil from Cushing to Port Arthur, Texas. The Keystone XL Pipeline is the proposed fourth phase, improving on Phase I, with a shorter route and a larger-diameter pipe, but was rejected largely due to environmental concerns, such as fracking [http://cleantechnica.com/2016/02/15/keystone-xl-pipeline-meet-oklahoma-earthquakes/]. Last month, reports surfaced of the Keystone XL Pipeline project possibly being resurrected, which is making people think about those same fracking concerns, specifically earthquakes in Oklahoma. END_OF_DOCUMENT_TOKEN_TO_BE_REPLACED

Stephanie Kurose, a law student at the American University in Washington DC, calls our attention to both the concept of, and two startups trying to push, micro-tracers which could be injected into fracking fluid so that if it escapes, we know whodunit. The idea is simple, if not yet operational; create some long-lived non-toxic chemical compound with enough potential variation that a different version could be mixed in with the fracking fluid for each individual well. The arguments for it, espoused by Kurose, are equally simple; drilling companies would know if they had a problem with leakage and could change their technology, falsely-accused drilling companies could exonerate themselves, and the public should feel much less angst about fracking if evidence of leaked fracking fluid fails to materialize (or vice versa.) It might be that drilling companies would resist in order to avoid any conclusive evidence that their wells have leaked, but so far no one knows because suitable tracers have yet to be deployed. The two startups giving it a shot are BaseTrace and FracEnsure. END_OF_DOCUMENT_TOKEN_TO_BE_REPLACED

The December 4, 2014 issue of the scientific journal Nature takes the position that the current abundance of natural gas in the US derived from horizontal drilling and hydraulic fracturing may be a much shorter-term phenomenon than most analysts have thought. In both an editorial and an opinion piece (not however in a scientific paper) the journal takes issue with the US Energy Administration’s (USEA) assessment that natural gas production in the US will continue to grow for a quarter century, at least. Nature relies on the opinions of a team of researchers at the University of Texas, and cites a 2013 paper (Patzek, 2012)) by members of the team which now consists of a dozen geoscientists, petroleum engineers, and economists. That paper examines extraction data from 2,057 such wells in the oldest US shale play, the Barnett Shale in Texas, and concludes that they started to decline at an exponential rate in ten years or less, and goes on to predict the total amount of gas that will be produced by their overall sample of 8,294 wells; 10–20 trillion standard cubic feet over the next 50 years. END_OF_DOCUMENT_TOKEN_TO_BE_REPLACED

Hydraulic fracturing requires a large quantity of fluid; most estimates place the amount at 2 to 4 million gallons per well. This fluid is composed of 90% water, 8–9.5% proppants (sand which is needed to keep fractures open once hydraulic fracturing occurs), and 0.5–2% chemicals. Companies that perform hydraulic fracturing invest time and resources into creating their fracturing fluid formulas, so they insist on keeping those formulas proprietary because revealing the information could cause the company to lose its competitive edge. However, some common fracturing chemicals have been identified and are known to cause adverse human health effects, so keeping the composition of fracturing fluid confidential could be dangerous in the case of an emergency situation. Even in normal operating circumstances, these fracturing fluids could theoretically make their way into surface water or groundwater because hydraulic fracturing creates new flow paths through deep shale formations and speeds up the natural flow of fluids closer to the surface or aquifers. Maule et al. (2013) investigated recent efforts to regulate the disclosure of fracturing chemicals. Current systems in place include a voluntary reporting website, limited state regulation, and no federal regulation. Regulation efforts have faced problems of exemptions or loopholes, inadequate or incomplete information reporting, lack of enforcement, and competing state and federal interests. END_OF_DOCUMENT_TOKEN_TO_BE_REPLACED

Daniel E. Klein, an energy industry consultant, writes an interesting piece about fracking problems in Natural Gas & Electricity, an industry newsletter. His approach is to look at the prognostications of the Energy Information Administration Annual Energy Outlook (AEO)—pretty much the bible of energy projections—as they have changed from 2000 to projections of where we will stand in 2040. For example, there wasn’t much shale gas until 2005 and in 2005 the AEO predicted that US natural gas imports would increase sharply in the near future. The 2014 projection, however shows the opposite: a steady increase in US exports, at least through 2024. Similarly, “peak oil” in the US has also been reversed by shale oil production, with the crude oil production in 2013 the highest in 25 years, and imports falling sharply, at least so far. Yesterday, the news was that OPEC was debating, on the one hand, decreasing oil production, so as to increase global oil prices and therefore revenues (four members wanted that), or letting production stand so as to lower prices even further to put price pressure on American fracking operations. The latter option won, at least until June when OPEC meets again, but in the short term oil prices will have little effect on American oil operations. END_OF_DOCUMENT_TOKEN_TO_BE_REPLACED 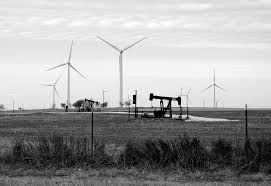 Seems like a good idea. Yael Rebecca Glazer just suggested it in a Masters Thesis in Engineering at the University of Texas at Austin. A major issue with fracking is that sometimes a lot of the fracking fluid that was pumped down the well to create the fractures comes back up, sometimes along with additional “produced” water, sometimes twice as much as was pumped down in the first place. On top of that, it is often so contaminated that it exceeds the capabilities of industrial treatment facilities, so it gets trucked to a nearby injection well and is reinserted. But injection wells are not always handy, and anyway, the water itself would be valuable if it weren’t so polluted. Meanwhile, although a fracked well might producing mainly oil, there is also often a fair amount of natural gas produced; but if there isn’t enough gas to make it economical to capture it and sell it, it is commonly flared—burned right there at the wellhead. This converts the natural gas to CO2 without using the energy released for anything at all. Maybe, thought Ms. Glazer, that free energy could be used onsite to power wastewater cleanup technologies that normally wouldn’t be considered because of their high energy costs. It also occurred to her that since lots of these wells are in the sunny, windy southwestern US, local photovoltaic panels or wind turbines might supply energy as well. This latter option is attractive when there are no convenient transmission lines to take the power offsite, even though solar or wind energy is abundant. END_OF_DOCUMENT_TOKEN_TO_BE_REPLACED Perhaps the biggest environmental and health concern related to shale gas development is the possibility of contaminants leaking from the well shaft into nearby groundwater supplies. The first sign of such leakage would be stray methane in groundwater, as methane is a small enough molecule to move through tiny spaces and easily dissolves in water. Jackson et al. explored the possibility of stray gas contamination by testing for concentrations of methane, ethane, and propane in drinking water wells of homes in the Marcellus shale region of Pennsylvania. The researchers generally found higher amounts of dissolved gases in drinking water wells less than one kilometer from a natural gas well. Statistical analysis showed that distance from gas wells was the most significant factor for END_OF_DOCUMENT_TOKEN_TO_BE_REPLACED