It turns out that solar energy systems have consideration-worthy regional consequences. But you may ask: why? Solar panels are not 100% efficient, they are actually fairly far from it. The most efficient solar panels on the market today run at around a 40% efficiency, with some new technologies promising around 60%, however most are much lower. A few issues arise in the conversion of solar energy into electricity. Firstly, a small percent of the solar radiation is reflected, as a result of solar panels’ glare. Then, another few percent are lost in the conversion of direct-current into alternating current and along the transmitting wires to centers of population. The authors estimate the mentioned causes to sum to about a 10% loss. END_OF_DOCUMENT_TOKEN_TO_BE_REPLACED 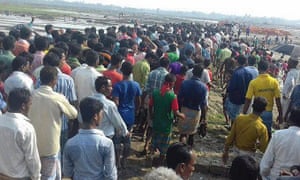 Bangladesh has plans to dramatically expand its energy production through coal in the next few years with the assistance of China, Japan, and India. But has not indicated any plans to expand renewable energy development. Other Asian nations have been setting their sights on renewable forms of energy because of an increasingly worsening pollution crisis in the region. The government hopes to expand its use of coal from 2% to 50% of Bangladesh’s electricity supply by 2022. There have been vehement protests about this expansion, particularly against a specific plant currently under construction; several people have lost their lives amidst the protests. END_OF_DOCUMENT_TOKEN_TO_BE_REPLACED

Even though there was a dip in production by 3 percent last year in a governmental effort to mitigate pollution and rising sea levels, Chinese coal is still the planet’s greatest source of carbon emission from human activities and the reopening of mines spells all kinds of environment-related troubles. END_OF_DOCUMENT_TOKEN_TO_BE_REPLACED

LeapTech, is NASA’s latest project geared towards testing a different approach to powering flight. It has the potential to pave the way for low-carbon aviation. Rather than using a fossil fuel burning engine, LeapTech is a truck-plane hybrid, with 18 electric motors along its leading edge, each containing a small propeller. The small propellers are used to test the distributed propulsion in order to analyze if it has the potential to lead to the creation of energy efficient aircraft designs that would ultimately produce less pollution. END_OF_DOCUMENT_TOKEN_TO_BE_REPLACED

Norway just became the first country to attempt to capture CO2 from the fumes of burning trash. A test plant at a waste incinerator in Klemetsrud will test several technologies for CO2 capture with a goal of presenting results to the government by June 2016. If successful, this innovative project will be a huge step forward for carbon capture technology and will help Norway mitigate the environmentally degrading impacts of its largest emission source. END_OF_DOCUMENT_TOKEN_TO_BE_REPLACED

One of the most hotly contested subjects in America over the past ten years has been the issue of climate change. Is it real, how will it affect the citizens of America and the world, what can we do to lessen if not reverse the impacts of global warming? Until recently, it seemed like we might never reach an answer. You might recall the infamous, failed meeting in Copenhagen in 2009 which was called to address a possible worldwide plan to attack this issue. However, this year, there is better news. END_OF_DOCUMENT_TOKEN_TO_BE_REPLACED

On January 22, Secretary of Interior Sally Jewell announced proposals for a new rule to reduce natural gas emissions and waste from oil and gas drilling on public and Native American lands. Companies have to adopt currently available methods to limit the venting, flaring and leaking of natural gas during production. According to the Interior Department, the natural gas lost from public lands between 2009 and 2014 could power more than 500 million homes for a year. In calling for changes, Secretary Jewell emphasized the need to reduce waste of natural gas supplies, reduce harmful methane emissions and provide taxpayers a fair return from public resources (via royalties). Current regulations are 30 years old; meanwhile, the oil and gas industries have grown, and technology advances have allowed for more efficient production. Furthermore, the Obama Administration is set on fighting climate change and has a goal of reducing methane emissions from oil and gas by 40 – 45% from 2012 levels by 2025. END_OF_DOCUMENT_TOKEN_TO_BE_REPLACED

Many developing economies are undergoing an energy transformation, and in the face of global warming, there has been a push towards investment in renewable sources, such as wind power. Chingulpitak and Wongwises (2014) review the current status of wind energy development in Thailand. The Thai government has stated goals of increasing its use of renewable fuels to 25% by 2021, and wind energy is a large component of this transformation. In 2012, only 111.7 MW of wind power was generated, but the Thai government aims to increase production to 1800 MW in this timeframe. In addition to its own worth, Thailand’s energy transformation can provide insight into the challenges of other developing nations around the globe. END_OF_DOCUMENT_TOKEN_TO_BE_REPLACED

The history of the automobile industry, in many respects, illustrates the progression of society’s perception and response to climate change. Caetano C.R. Penna and Frank W. Geels compare the progression of climate change from 1979 to 2012 using the Dialectic Issue LifeCycle (DILC) model in Climate change and the slow reorientation of the American car industry (1979–2012): An application and extension of the Dialectic Issue LifeCycle (DILC) model. The DILC classifies the progression of an issue into five major stages. In the first stage, the problem emerges, generally due to activist groups, and the affected industry rejects the issue and downplays its importance. During this stage, there is little progression in changing technologies. In the second stage, public concern begins to increase as activists generate social movements. Public agendas address the issue and policymakers create committees to study it, although this action is mainly symbolic. In the third stage, rising public concern spurs political debates, leading to formal hearings and investigations. The industry argues for voluntary implementation of solutions and attempts to show that the costs and technical complexity of rapid change make radical solutions impossible. Meanwhile, firms in the industry often take defensive measures, privately exploring solutions in laboratories. In the fourth stage, policies begin to be implemented through legislation. Suppliers and others that support the industry begin to develop technology while the industry itself actively argues against the new policies. At the same time, industry firms begin to invest in alternative technologies and embrace them more publicly in order to maintain the company image. This often leads to an innovation race. Finally, in the fifth phase, a new market emerges due to changes in mainstream consumer preferences and/or because regulators impose taxes or incentives, or other legislation causes a shift in economic conditions. To bolster the public image of the company, most address the problem in the company’s beliefs and mission. END_OF_DOCUMENT_TOKEN_TO_BE_REPLACED

Kelley et al. (2015) writing in The Proceedings of the National Academy of Sciences linked the Syrian Civil War to climate change. The Fertile Crescent, more specifically Syria, has experienced a severe prolonged drought since 2006. In a country dominated by agriculture, the drought killed enormous amounts of livestock and crops. To make matters worse, before this dry spell began, former Syrian President Hafez al-Assad implemented policies to increase agricultural production, despite a shortage in water. These policies made Syria particularly defenseless when the drought began. END_OF_DOCUMENT_TOKEN_TO_BE_REPLACED