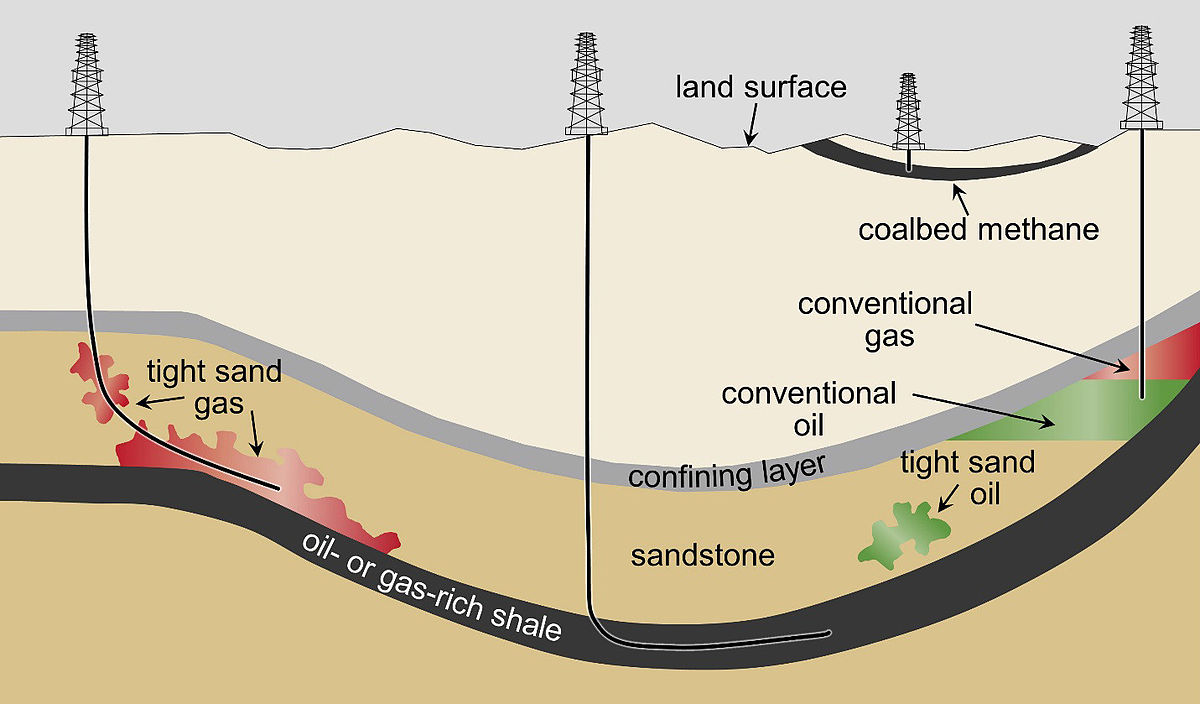 According to the results of a study done in China by Li et. al (2016), there is no method for measuring oil potential in shale reservoirs that includes both residual oil contents in the rocks as well as hydrocarbon expulsion and migration conditions. Li and his colleagues developed soon an index for determining oil potential. If the index is greater than zero, then some of the oil has migrated to external reservoirs which means that it has poor shale oil potential. Li et. al. argue that because current methods include absorbed, as well as free hydrocarbons, they are overvaluing the shale oil and not looking at oil that can readily be used. The method developed in this paper has multiple parameters and is a more comprehensive measurement since it takes into account oil saturation, free oil content, and shale oil expulsion. END_OF_DOCUMENT_TOKEN_TO_BE_REPLACED

According to the results of a study done in China by Li et. al (2016), there is no method for measuring oil potential in shale reservoirs that includes both residual oil contents in the rocks as well as hydrocarbon expulsion and migration conditions. Li and his colleagues developed soon an index for determining oil potential. If the index is greater than zero, then some of the oil has migrated to external reservoirs which means that it has poor shale oil potential. Li et. al. argue that because current methods include absorbed, as well as free hydrocarbons, they are overvaluing the shale oil and not looking at oil that can readily be used. The method developed in this paper has multiple parameters and is a more comprehensive measurement since it takes into account oil saturation, free oil content, and shale oil expulsion. END_OF_DOCUMENT_TOKEN_TO_BE_REPLACED

Even though there was a dip in production by 3 percent last year in a governmental effort to mitigate pollution and rising sea levels, Chinese coal is still the planet’s greatest source of carbon emission from human activities and the reopening of mines spells all kinds of environment-related troubles. END_OF_DOCUMENT_TOKEN_TO_BE_REPLACED Tom Phillips’ article on China’s construction of the world’s largest solar panel farm is a useful primer on the various perspectives surrounding the project. China’s grandiose scale of renewable energy initiatives can be read as a strategic move to increase their global soft-power. This is prescient in a world where many global superpowers regard climate change as a serious threat. Phillips acknowledges this upscaling as stratagem when he notes its concurrence with the election of a U.S. President who is a climate-denier. But a single solar farm, no matter the grandeur of its sobriquet, cannot nullify the environmental impact of an entire nation, and issues of curtailment – energy produced that does not reach the grid – undercut the potential reformative power of China’s green energy production. According to a New York Times article also on the new solar farm, 19% of China’s wind energy produced in the first six months of 2016 was curtailed, compared to “negligible” amounts of energy lost in the U.S. [www.nytimes.com/2017/01/05/world/asia/china-renewable-energy-investment.html]. And while China’s current enthusiasm for energy reform is a hopeful sign, long-term commitment is necessary for real change. If current initiatives are only political maneuvers made in a global climate that is changing with the succession of a Trump presidency, then the difference Phillips reports between “a climate leader but not the climate leader” will be felt in their, the initiative’s, long-term ineffectiveness. Is a China-as-world-climate-leader that unimaginable in a world of said radical change? END_OF_DOCUMENT_TOKEN_TO_BE_REPLACED

Coal is 66% of China’s total energy consumption leading China to be one of the largest greenhouse gas emitters in the world. In a recent journal article, Xiaoxia Zhou explains how China’s growing economy, urbanization, and industrialization come at the steep cost of environmental pollution and the exhaustion of China’s natural resources. Researchers, policy makers, scientists, and politics in China are scrambling to find a solution to these problems. They are making progress. China’s energy development plan states that by 2020 their non-fossil energy will rise from it’s current 9.8% to 15% (Guo, 2016). The question up for debate now is how? Outsiders suggest they should just go green and follow in the footsteps of other countries, but I think China is worried about a different kind of green. END_OF_DOCUMENT_TOKEN_TO_BE_REPLACED

A recent Greentech Media article outlines the worldwide trend of mobile energy plants being moved into the ocean. Author Julia Pyper surveys energy initiatives regarding mobile power plants across the globe, including China, Russia, Japan, U.S., and Norway. Much of construction will be completed soon, by late 2010s or early 2020s. Pyper also examines the pros and cons of each policy, noting how benefits differ depending on the type of energy plant. Also, these plants are expected to be less harmful to the environment than onshore plants, take up less livable space, and are cheaper to maintain. However, it will be hard to find staff and equipment for these floating devices, and radioactive substances could potentially contaminate the surrounding areas. END_OF_DOCUMENT_TOKEN_TO_BE_REPLACED

This is a very interesting article that illustrates the implications o the change of economic structure on the emissions and energy use in China. The Chinese CO2 intensity and energy intensity targets are rather stringent. Reaching the CO2 intensity target is difficult even with the optimistic assumption of fast expansion of renewable energy capacity and fast structural change. The Chinese economy is in a transitional state: Chinese leadership hopes to steer the economic development away from exports and investment and towards serving the Chinese domestic market, increasing the living standard of the Chinese citizenry as well as reducing the environmental impact that the long-enduring high economic growth has caused. In addition to the long-enduring high economic growth has caused. Among the global economies, China is the largest emitter of CO2 emissions and the development of its economic system in the next fifteen years will have great weight in determining cumulative global emissions. END_OF_DOCUMENT_TOKEN_TO_BE_REPLACED

Wind power comes with the disadvantage of intermittent gaps in energy production and instances of excess supply. This variability puts strain on the electric grid and is the primary barrier to large-scale wind power integration. In order to combat this issue, various forms of energy storage have been considered to bridge the gap between supply and demand of wind power. Gao et al. 2014 conduct a brief literature review on all existing energy storage systems (ESS) for wind power. Each method comes with drawbacks associated with scale, cost, or safety, but hydrogen-oxygen storage was seen here as the best future option. By improving storage technologies, wind energy will become more viable in the market and help to reduce the share of energy coming from fossil fuels that contribute to climate change. In addition to the literature review, this study examined a possible hydrogen-oxygen ESS in Jiangsu Province, China and saw that such an operation could be profitable in the current market.

While there are some operational forms of ESS, there is a variety of issues preventing ESS –and subsequently, wind power– from becoming widespread energy sources. For example, battery power is too costly and difficult to build at a large scale, systems that involve pumping water upward for energy storage have geographical limitations, and magnetic energy storage has low storage time. In the case of hydrogen generation from electrolysis, the costs are simply too high to be competitive in the energy market with capital costs of 1000-2500$/kW (when they need to be near 400 $/kW).

Hydrogen-oxygen combined storage consists of electrolyzers that break water down into hydrogen and oxygen. The hydrogen and oxygen are combusted to form super-heated steam that powers turbines. The system is closed, and uses water as a recycled fuel. Gao and colleagues examined three variants of hydrogen-oxygen ESS: simple integrated ESS, integrated ESS with a feed water heater, and an integrated ESS with both a feed water heater and a steam reheater. In simple terms, these systems each contain an additional measure to capture heat from the steam turbines and use that heat elsewhere in the process, thus improving efficiency. All of these integrated systems contain a complex web of mechanisms that can be adjusted alongside price fluctuations in the power market to minimize costs. The former two had roughly equivalent efficiencies of 49%, but the latter system had efficiency of up to 54.6%, thus demonstrating the benefits of feed water heaters and steam reheaters.

While the 54.6% efficiency of the fully integrated system is marginally below that of some other ESS technologies, hydrogen-oxygen systems come with certain advantages. They can be implemented on a large scale, are fully eco-friendly, not limited by geographical and material restraints, and can be adjusted rapidly based on demand changes. The system was analyzed under two extreme scenarios: an “intermittent operation mode” simulating an extremely variable wind supply, and “continuous operation mode” simulating a perfectly steady supply. Because of how effectively the system dealt with times of low wind, it was actually more profitable under the intermittent scenario with annual income of $13 million per year. Real wind conditions lie somewhere between these extremes, and efficiencies of approximately 50% and prices of 0.03–0.05$/kWh were estimated.

China is the world’s largest user of energy, and one of the largest consumers of coal. However, recently it has shifted to solar power and started relying less on oil, natural gas, and coal. Between January 2014 to June 2014, China added 3.3 gigawatts of solar capacity, which brings China’s total to 23 gigawatts (Topf, 2015). This is the second largest solar capacity behind Germany’s 36 gigawatts. The Chinese government has gone as far as to ban the use of coal by 2020. The renewed focus on the clean energy has a lot to do with the worsening smog conditions and an attempt to clean up the environment. China has appropriated $23.5 billion to finance an increase in solar panel use which is the most money assigned to solar energy. END_OF_DOCUMENT_TOKEN_TO_BE_REPLACED

According to Yao and Chang (2015), China’s energy security has not improved over 30 years of reform. The authors aimed to understand why in a qualitative fashion, finding a critical component is China’s macroeconomic reform. By analyzing China’s energy security in this fashion, these researchers hope to broaden the perspective on the way developing economies in transition conduct research on their energy security. END_OF_DOCUMENT_TOKEN_TO_BE_REPLACED