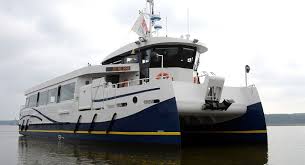 When we think of all-electric cars, we think lithium-ion batteries because they are lightweight and have a high power density. For ships, light-weight doesn’t matter so much, and it turns out there are types of shipping routes that don’t need very much energy storage: think ferries, specifically the plug-in ferry Ar Vag Tredan (the “electric boat” in Breton), a zero-emission passenger ferry crossing the Lorient roadstead 56 times a day. When parked between trips it can recharge its supercapacitor more-or-less instantly (that’s a main feature of supercapacitors—that and their ability to discharge their power equally quickly to meet any need for power the ship may have.) How would a flywheel energy storage system work compared to the existing supercapacitor? That’s the question asked in a new paper by Olivier et al. (2014).

The answer is, pretty well. This is a full-on engineering paper stuffed to the gills with calculations, looking at the problem every which way (that’s what engineers do), but they are still looking at a basic system: optimizing the flywheel, the electrical machine (they mean motor I bet) and the power converter which converts electricity into flywheel spinning and vice versa. They assume the flywheel will last 20 years, the ship crossing 35 times a day (less than it actually does it looks like), spending ten minutes motoring across—expending 16 kWh—and five minutes at each end loading, unloading, and recharging.