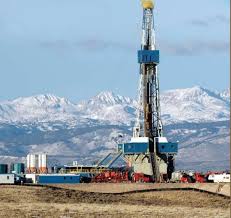 The researchers made a systematic effort to factor out the non-O&G methane emissions from the many agricultural sources in the region, using county-level agricultural census statistics from Colorado and the USEPA to determine the head count for several categories of cattle, as well as for sheep and poultry. This they multiplied by standard methane emission factors for each type, assuming a 20% uncertainty in both head count and emission factors—that their estimated head count was within 10% of the permitted capacity supported its accuracy. They also estimated emissions from manure management, but with less certainty owing to a lack of information on the details of the individual management systems. Additionally they estimated releases from the municipal landfills and both municipal and industrial wastewater treatment plants. All of this resulted in a “bottom-up” estimate of methane emissions from all non-O&G sources, which allowed them to attribute the rest to the O&G operations. The aircraft also took flask samples to measure non-methane hydrocarbon concentrations, and all of these were linearly correlated with the methane concentrations, suggesting the same source, presumably O&G operations.

It isn’t clear why there is such a large discrepancy between bottom-up and top-down estimates of O&G-related volatile organic compound releases, but a reader of this paper would infer that there is not nearly enough monitoring of ground-based releases to give any sort of accurate overall results. There are as many as several thousand new wells being drilled and hydraulically fractured each year in their study area but, according to the authors, only a subset of them is subject to inspection; if they are drilled by the largest of the over 100 companies in the area that subset is inspected every 3 years; if they belong to a smaller company, only every 5 years. Clearly there is inadequate ground-based monitoring going on if a comprehensive view of O&G releases is desired.

Are any of these releases attributable to fracking? Virtually all of the new wells are fracked, but this study design had no way of determining at what stage of the production cycle the releases occurred.

Please m ake suggestion for related papers to blog about to emorhardt@cmc.edu.